The Reality of Today’s Business Travel 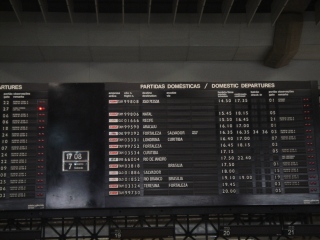 I’ve been watching as the holiday travel season hits its crescendo. Seeing all the people trapped in Denver has me thinking about all the traveling I’ve done over the last few months. The accompanying soundtrack for these thoughts is one from the Man in Black called ”I’ve Been Everywhere”. My version of the song would include the alternative lines: “I’ve been to Toronto-Newark-Manhattan-Buenos Aires-Sao Paulo-Denver-San Diego…”

Earlier in my career, I really enjoyed the opportunity to travel. But these days…well, the appeal is gone. Don’t get me wrong, most of my trips are centered around speaking to employees in “town halls”, meeting with customers and government officials and spending time with people from my team. This part is great and immensely satisfying. However, the travel itself is brutal.

Here’s a good example from a recent trip to South America. After several days of non-stop meetings in Sao Paulo, I depart at 3pm and head to the airport arriving at 5pm (serious traffic in that city). Proceeding to the check-in counter, I discover there is no one there. I recheck my tickets and find that in my jet-lagged state, I had misread them and that my flight does not leave for another six hours. Now, I don’t want to say that there is a shortage of things to do in the Sao Paulo Airport but… Let me put this way, after three hours, I’m helping the janitorial crew clean up the waiting lounge just to keep myself awake.

Finally, at 10:30pm, I head for my gate, but once there I’m informed that the flight is delayed due to “routine maintenance”. At 12:15am, the flight crew arrives running through the terminal. Coincidently, our “routine maintenance” is now completed and we are ready to board. Thirty minutes later we are finally in the air and headed for Miami.

Of course, as a result of the delay, I miss my flight from Miami to San Francisco and am forced to spend an additional four hours in Miami International Airport (By the way, if this ever happens to you, stop by “Angelo’s Hair Port”. The owner – Angel – has been working in the same location since arriving from Cuba in 1958. His haircutting abilities are rivaled only by his stories. And, he does an amazing straight razor shave).

I finally land in San Francisco at 4pm. After a one-hour drive, I arrive home; say “hello” to the family and drop into a coma – a very deep coma. Total travel time almost 30 hours.

And stories like this don’t make me feel much better.

Planting seeds during the holidays

Like many parents, my wife and I feel conflicted during the holidays. On the one hand, we experience warm nostalgic enjoyment as we watch the children rip into their presents. But, at the same time, we feel a need for them to understand the value of giving to others.

Unfortunately, there is no stronger force in the universe than my son’s focus on the acquisition of Legos during the month of December. It is unwavering, unbreakable and impervious to my paternal pleas that he think of others.

A few years ago, we tried something in order to better create a connection between our children and charitable giving. We gave each of them a sum of money to donate to the charity of their choice. The only requirement was that they had to research the charity, explain why it was selected and what portion of their donation would actually go to the recipients (after administrative expenses).

Our success was mixed. Each year, my youngest would select any charity that helps “puppies”. He wasn’t interested in considering other organizations and he didn’t spend much time in the selection process. For him, it’s just about the puppies. One year, my daughter selected a charity devoted to the eradication of breast cancer. She almost drove us to poverty with her unexpectedly effective fund raising abilities (we agreed to match whatever she raised). Another child tended to select only the Red Cross. Obviously a wonderful organization, but I am fairly certain that his selection was based of efficiency – “get it over with, get Dad off my back and get to thinking about my presents”.

This year, we decided to do something different. I’ve been reading about the positive impact of “micro lending” or “micro credit”. It received attention recently when the Nobel Peace Prize went to Muhammed Yunus for his work in this area. (I just ordered his book). The concept is that many of the world’s citizens are not able to avail themselves of loans from traditional banking systems. These people generally don’t have collateral or a credit history; the needed loan amounts are small and the ability to pay interest limited. Overall, not an attractive market segment for most financial institutions.

Micro financing institutions (MFIs) identify and qualify potential loan recipients. The MFI then raises the loan amount through the aggregation of smaller loans from individual lenders around the world. The MFI (usually a charitable organization) administers the loan and also its repayment.

Because of the Internet, participation in micro lending has exploded. Why? First, it’s a relatively easy way for lenders to contribute. You just use your credit card or Paypal account over the web. Second, the global reach of the Internet provides the greatest access to potential lenders. And, third, the Internet enables a direct sense of relationship between the lender and the recipient. Websites for most MFI’s include individual pages for each loan recipient. These usually contain a photograph and personal information about the person, their history of repayment of past loans and intended use of the proceeds. As the loan is repaid, the website is updated and each lender’s balance credited. And, here’s what I really find fascinating. With most micro loans, no collateral is required – yet the repayment rate is greater than 95%.

So this year, we gave each child money to loan through an MFI. There are many of them, but we are using Kiva. As the children read the stories about the different people seeking loans you could sense a connection being made. When I asked why they wanted to fund a given loan, the answers included things like: “they will use the money to hire someone else, which will help their community” or “they have repaid a loan successfully in the past” or “she is supporting her entire family with her business” or, more importantly, “the amount they need for their business is less than what all my Legos cost.”

I’m not sure how effective this will be, but it looks promising. My daughter was excited to tell us that her loan recipient (a barber in Uganda who is requesting a loan to expand his business) is now fully funded. And, my son is already looking for additional loans to fund after his initial loan is repaid.

I was going to devote this blog to the recent U.S. Supreme Court hearing in KSR v. Teleflex, but Dennis Crouch has a provided a good overview along with links to the pleadings and hearing transcript. This is one of the most significant IP cases in recent years because the court will provide guidance on what is “obvious” for purposes of a claimed innovation. If something is obvious, it can’t be patented. If the court broadens the definition, it will lead to a higher number of patents – and likely an increase in litigation.

In reading the court transcript, you can see how the parties and the court wrestle with how properly to define “obvious” for purposes of U.S. Code: Title 35. To be candid, although the case is tremendously significant, it isn’t exactly scintillating reading. In fact, IP cases rarely are. As a result, IP attorneys have a reputation as being the humorless “geeks” of their profession.

But, in their defense, let me say that IP attorneys are some of the funniest people I know. Don’t believe me?

What about Claim 9 of this patent application. Or, how about the ability to rap the US patent code)? (And, if you’re part of Sun’s IP Legal team, you can dance to it as well!).