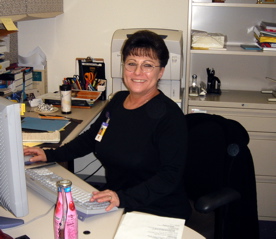 This wonderful woman is my administrative assistant. You’re correct. She is not John Stockton. John Stockton is a 6’1″ former point guard for the NBA Utah Jazz. My admin stands about 5’5″ and, to my knowledge, does not possess much “round ball” experience. (As I write this, I’m enjoying a funny visual of her driving the lane against Yao Ming.)

For those of you who are not fans of U.S. basketball, John Stockton wasn’t flashy or outspoken. He didn’t possess overwhelming physical skills. And, he was a bit average in the scoring department. Yet in 1996, he was voted one of the top 50 players in NBA history. How did he accomplish this? Stockton’s special talent was that he elevated the game of everyone around him. He was one of those athletes who was seemingly always around the ball and he possessed that unique ability to know where he was in relation to everyone else on the court. Above all else, he was selfless. He made a career of giving teammates the opportunity to score rather than taking the shot himself (15,806 times to be exact).

Although she is not John Stockton, my admin plays the same role in our organization. She seems to have a sense of what issues need to be handled before anyone else is even aware they exist. She rarely asks for direction. Instead she identifies a problem and fixes it. She’s a mentor (formal and informal) for many in our department. She’s a cheerleader. She’s a diplomat (although she can throw some elbows when needed). And, she is constantly taking on significant new responsibilities.

It took some time for me to fully appreciate the value she provides as I’ve operated most of my career with little need for administrative support. But after we had worked together for about three months she did something that made me take notice. What she did was clear my calendar of all Friday afternoon meetings for the rest of the year – without asking me. When she told me this my initial reaction was less than positive, but I decided to listen to what she had to say. Her explanation was that she had observed the way that I work (multiple working locations and non-stop meetings) and felt that I needed to block out time to think strategically and work on longer-term initiatives. Rather than being upset that she didn’t consult me, I welcomed her proactivity. It took courage for her to do this, especially with a new manager. But, she was absolutely right.

Since then, I’ve frequently marvelled at how she understands the needs of the organization, assesses what needs to be done and makes it happen. And, she is not a singular example. We have many other support personnel who act the same way. Often without notice or fanfare, they help us to always perform at a higher level.

All of which makes me wonder about the cranial capacity of managers who are described in articles like this.

4 responses to “My admin, John Stockton”