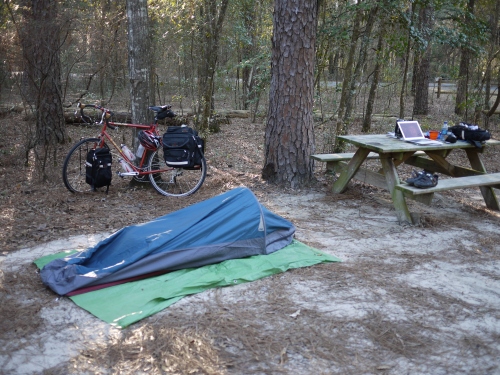 The morning was spent making adjustments to my bike and gear. I think it will take a few days before everything is dialed-in. Yesterday, I tested the balance by attempting to ride with no hands on the bars. Each time, the bike took an immediate and sharp right turn. Adjusting the load on the front should solve this.

My bigger problem was solved by the discovery of a Starbucks. No, not for coffee. I’m out of reading materials and evidently there is not a bookstore for 45 miles (how can that be?), but I snagged the last copy of the Sunday NY Times to last me until I get to Tallahassee.

I met two separate pairs of riders finishing up the southern route. One was a nice couple from Missoula, MT who started in Oregon and worked their way across the US from So Cal. They have a blog called 5,000 Miles and One Left Turn”. Clearly, they are much more creative than the author of the pathetically named “Mike’s Blog”.

While sunny today, the headwind was relentless. Riding into a heavy wind is never fun, but it is even worse with the addition of panniers. The only interruption in my miserable reverie was when I was chased down CR 132 by what can only described as a pit bull – dachshund mix. This mongrel came sprinting out of nowhere and ran after me for almost a quarter mile. I had nature’s mace (i.e. a handful of rocks) at the ready, but eventually out-raced him. (In case you’re keeping track at home – a 4 on the Major Dickason scale (cf. previous post)). Cesar Millan where are you?

The flora gradually changed as I rode in the direction of the Suwannee River. In addition to yesterday’s abundance of pines and saw palmettos, there were long leaf pines (used for the masts of 19th century sailing ships), sweet gum and an occasional red cedar to keep things interesting. But the predominant tree was the live oak filled with grey “Grandfather’s Beard” moss that lined most of today’s route.

At 3pm, I gave the wind its victory and found a camping spot at Suwannee River State Park. It has both warm showers and a book exchange. The bad news is that the best (and I’m serious here) book available was a hardback edition of Michael Flatley’s autobiography “Lord of the Dance”. As inclined as I am to the idea of wearing tights and dancing bare chested to Irish music, I suspect those days may be behind me. So, I left it and watched the sun set enjoying a cup of tea and the Times.