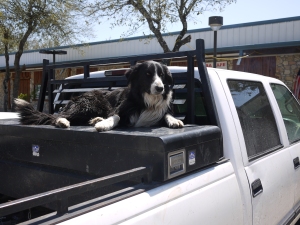 Austin is a very difficult city to leave. The food, music and art are captivating. The Green Mesquite BBQ sauce exuding from my pores throughout today’s ride was a reminder of how much I enjoyed exploring the place. I even grew to appreciate the Grackles with their cacophony of calls in the early evening.

But, the best part of the week was spending time with the girls. It feels like I’ve been gone for years, rather than just a month. I expect that my iPod will be playing mournful cowboy songs the next few days as I grapple with loneliness.

Before getting on the road this morning, I swapped out my tires for a fresh set that should hold me until I get home. I also repacked my gear and gave some of it to WCC to take back so that I could lighten my load.

Yet, despite my preparations, it was tough day. After five days off, my body clearly had convinced itself that we were done with this cross-country jaunt and voiced its displeasure through various aches and creaking sounds from my joints.

For most of the ride, the views were of wealthy suburbs of Austin. Near Henly, the beauty of the Hill Country began to reveal itself. Wildflowers, oak trees and switchgrass filled the scenery along with white dirt ranch roads disappearing into the mesquite brush. Spring here is something special.

Only one thing marred the day – headwinds. They began as I left Austin and picked up in velocity in the afternoon. By the time I reached Johnson City, my tank was empty. I

checked into the first hotel I found, showered and went for a walk downtown. This small town with a population of less than 1,200 people is the birthplace of LBJ. On the porch of this home, our 36th president launched his senatorial and presidential campaigns.

Yards away from this house I saw the headquarters of Pedernales Electrical Cooperative. It was a subtle reminder of one of President Johnson’s most significant legislative efforts. In his series, The Years of Lyndon Johnson, author Robert Caro provides a moving account of what life was like in the Hill Country before electrification, especially for women responsible for households. Among all of his accomplishments, President Johnson considered bringing electricity to the Hill Country one of the most important.

Leave a Reply to Greggy B Cancel reply