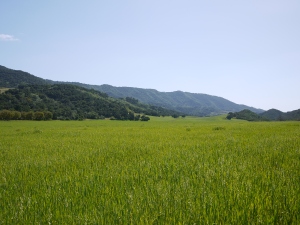 Interesting night, this last one. I was deep in sleep when I heard explosive pounding near my room combined with drunken, belligerent shouting. I threw on some pants, found my glasses and opened the door to get a brief glimpse of a man exiting the hotel. The door of the room next to me had been on the receiving end of his fist and the hallway was littered with fragments of the pressboard door.

I’ve got to start spending more on my accommodations.

It was a cool, beautiful morning. The verdant mountains of “Canyon Country” were draped with bloated, low hanging cumulous clouds. Mottled blue sky and sunshine attempted to make their way through with infrequent success.

Because I am off the ACA maps, I’m relying on my state road map and directions from others to find my way. I’ve tried the new Google bike map feature, but found it to be of little value (or reliability) given it is still in beta and requires more user input. I stopped at a Starbucks and the barista gave me directions to a new connector road that took me past the Six Flags amusement park over Interstate 5 and in the direction of Santa Paula.

Except for the heavily trafficked four lane highway, the ride was pleasing and became even more so as the day continued. On either side, orange tree orchards lined the road for miles – a Napa Valley of navel oranges. The last seasonal bouquet of orange blossom remained like an elderly, heavily perfumed, woman exiting an elevator. Along with the scenery, it made for an intoxicating few miles as I rode through Piru, Fillmore and into Santa Paula.

I locked my bike against a street lamp and took a break in Santa Paula to stretch my legs. From the perspective of my brief visit, this is a good example of a small, diverse, but healthy community. Santa Paula’s downtown section has beautiful murals and outdoor art, clean parks, a mixture of interesting shops and celebrates its history. The small, but excellent, Santa Paula Oil Museum is an example. It contains exhibits covering the  production, refining and transportation of oil, as well as equipment from the first discovery of oil in California in 1867 only five miles from town. Although I’m not sure of the connection, the museum also had a special exhibit on wolves containing beautifully realistic examples of the Mexican, Arctic, Rocky Mountain, Great Plains and Red Wolf – all native to North America.

The town also has a statute to memorialize the 1928 failure of the St. Francis Dam that killed more than 450 people. I remember reading about this years ago in Marc Reisner’s book Cadillac Desert (which should be required reading for every California citizen). It’s one thing to read about an event almost a century distant. But, to realize that the resulting flood drove twelve billion gallons of water from Santa Clarita over much of the route I have covered in my hours of riding today was horrific to imagine.

As I headed back to retrieve my bike, I was attracted by a display in the window of a store called “Exotic City Empire” and stepped inside. Despite its name, the store has a broad mix of many things reflecting the Hispanic style and culture, including old LPs, hats, jewelry and shirts. What interested me; however, were the custom “low rider” type bikes made by the owner, Hector. He started building these only four years ago and now has a local club with over seventy others who have similar bikes. The creativity and quality of his work was wonderful.

Leaving Santa Paula, I turned onto Hwy 150 and headed toward Ojai. It was here that I started to sense that I am finally “home” in Northern California. One of the things that you notice when you are moving at a cyclist’s pace is the change between different life zones. From the window of a car, it is a seamless blur, but from the saddle these transitions are like chapters in a book. A few days ago, I was in the lower Sonoran zone with Saguaro everywhere. This changed into the Mojave zone represented by the Joshua Tree. And, now, along this windy, bucolic two-lane road, I’m increasingly seeing Sunflowers, Miner’s lettuce, Valley Oak, Toyon and Salvia “Gracias”. I rode toward the summit enjoying these old friends, reminders of home, and the warm sun on my back.

Fifteen miles later, I had a spectacular descent into the Ojai Valley. Like a forgotten reflex, I found myself in a full tuck racing down the road, cutting the corners and enjoying the banked turns before realizing that I was on a fully loaded touring bike and not my road bike.

Many touring cyclists have spoken highly about their experiences with Warmshowers for finding places to stay. I didn’t sign up for it because I wasn’t aware of it until later in my ride. But, I’ve been blessed with my own personal version of Warmshowers in the form of several friends along the route. Tonight it will be courtesy of a great couple I have known for years that have a vacation home here. (Thank you, K&J.)