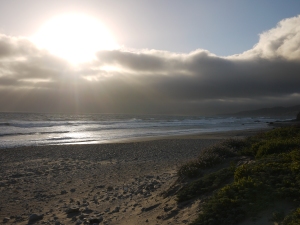 It’s almost 7pm as I write this. I’m huddled in a corner in front of the Jalama Market and Beach Café awaiting darkness so that I can crawl into my sleeping bag. I’m shivering so forcefully that it is difficult to keep my fingers on the keyboard. The wind is stronger than anything on the trip thus far. Since arriving late this afternoon, I have witnessed a parade of umbrellas, large trash bins, tents and coolers blowing through the campground like tumbleweeds. The only beneficiary of these conditions has been the kite surfers. I counted more than a dozen of them launching themselves over the waves in this insane wind.

But, to start at the beginning, I checked out of my hotel early this morning, found a market and replenished my food supplies so that I can camp over the next week. For me this means pouches of tuna, apples and bananas, tortillas, cheese, an avocado and my “guilty pleasure” a box of Frosted Blueberry Pop-Tarts. From there, I rode the Obern Coast Bike Trail through Goleta, past UCSB (Go Gauchos!) and onto the Hwy 101/PCH. It was setting up to be a classic California beach day with a light, but warm sea breeze and blue monochromatic skies. For a moment, I gave thought to spending another day in Santa Barbara. Later, I wished I had.

Near Gaviota, I followed Hwy 1 as it splits off and heads in the direction of Lompoc with a few challenging climbs. Ten miles later, I reached the turnoff for Jalama Beach. Because this is a 14-mile road that ends at the beach, it was almost completely free of traffic. About the only evidence of humans are the road itself, which runs through a number of beautiful valleys, telephone lines and a few solitary ranches. Otherwise, it is a gorgeous ride with California poppies and other wildflowers in abundance. It’s the type of road of which cyclists dream.

However, as I approached the beach in the late afternoon, the wind velocity increased alarmingly. I checked into the campground and tried to find a sheltered location, but they were all taken. So, I locked my bike and took a shower. The good news is that the campground has warm showers; the bad news is that the stench indicates that they should receive Superfund Cleanup status. “Soap, rinse and gag” is not the most enjoyable way to get clean.

I tried to walk on the beach – and it is certainly among the most resplendent on the Central Coast – but, the wind blistered me with sand. It was impossible to keep my glasses on my face. I took the opportunity to try one of the famous “Jalama Burgers” as an excuse to sit inside. (It lived up to the hype.) As I ate, I watched a number of campers and RVs pack up and head out. I wish I had that luxury, but I’m not up to another few hours of riding, especially at dusk.

After the store closed, I walked around the campground trying to find somewhere protected, again without success. I ended up pulling all my belongings into a slightly sheltered area in front of the store. I used my last cache of medicinal agave juice to help keep warm. Now a few hours later, I’m just waiting for darkness and having a mental debate over what has been worse the dogs of Landry Parish, Louisiana or the zephyr I’ve been facing for the last 1,000 miles.