1. You’ve got to be a cyclist to relate, but this is funny as hell.

2. Introducing my teenage son to Lost in Translation.  And, discovering a shared delight in Bill Murray’s wry, sardonic sense of humor and  a mutual worship of all things ScarJo.

3. The fall of the Iron Curtain. A Starbucks in Beijing’s Forbidden City and this – all things that a few decades ago I never thought I’d see in my lifetime.

5. It begins today. The greatest of all athletic endeavors.

I love that scene in “The Natural.”  The one where the coach, Pop Fisher, says: “I should have been a farmer”.

My version of it is “I should have been a programmer”. I’ve always wished that I had followed that career path. Instead, a less than pleasant experience in my first college programming class (anyone still remember Pascal?)  convinced me to focus my energies elsewhere and I became an attorney. Perhaps this is the reason that I’ve always been drawn to working with engineers and programmers and providing them the business and legal support they need to innovate and create technical solutions to the problems facing society.

That’s why I find Code for America (“CFA”) so intriguing. Drawing on a legacy of government and non-profit volunteerism (Peace Corps, AmeriCorps, Teach for America), CFA recruits and funds bright, energetic and passionate  software programmers, project managers and web designers to participate for up to 11 months as a CFA Fellow. In this role, they are matched with local governments (currently in eight U.S. cities), which provide resources and support to accelerate the use of technology to solve the problems faced by their communities.

Some examples of CFA projects include:

Although these applications are created for specific cities, they are written using open source software (e.g. Drupal, for content management, and Ushahidi, for crowdsourcing/mapping) so that they can be easily redeployed in other cities. After all, most cities face the same types of issues and resource constraints.

You can argue that these applications are interesting, but they don’t really move the needle. (Please, please, CFA come up with a “killer app” that eliminates the need for me to ever visit the DMV again.) That may be right; however, it’s early. CFA, has only been in operation for a little over two years and on a very limited basis.

And CFA may have an even more important value than the specific projects completed by CFA Fellows. We can all find a reason to complain about government, but there are few of us who can argue that we don’t need it. Even, Grover Norquist in his oft-cited quote about shrinking government “down to a size where we can drown it in the bathtub,” acknowledged that he wasn’t in favor of abolishing it.   The issue isn’t the size of government, but how to make it more efficient, more accessible and more responsive to citizens.

To do this we need a new generation of energetic, intelligent and concerned citizens that have the technical skills to create Government 2.0. And, we need them to become part of government. Perhaps, through participating in CFA projects, some CFA Fellows will continue their work on either a volunteer basis or as government employees. More geeks in government would be a very good thing. 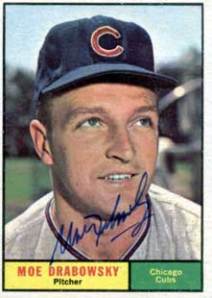 It’s easy to get a bit down these days. A debt crisis in Europe, continuing political unrest in the Middle East, a lingering global recession and, in the U.S., politicians beating up on one another like they are vying for an appearance on the Jerry Springer show. Yes, some days, it’s a challenge to feel positive about anything.

And, then, I remember Myron (“Moe”) Drabowsky, who passed away six years ago this month.

Drabowsky was a major league pitcher with eight teams over a 17 year career.  He was a consistently average pitcher, but one who occasionally achieved moments of greatness such as in the 1966 World Series where he appeared as a reliever and struck out 11 batters.

But what Drabowsky is best remembered for is his sense of humor. In the pressure packed world of professional baseball, he always found a way to help his teammates (and fans) find a way to laugh.

He was the guy who put goldfish in the water cooler of the opposing team. He also lit a string of firecrackers behind the Atlanta Braves mascot. In the bullpen during one game, he picked up the phone and ordered Chinese food  to be delivered to the ballpark. He enjoyed snakes. Enjoyed putting them in the shaving kits, lockers and clothing of unsuspecting teammates. Once, after being hit by a pitch, he arranged to be taken to first base in a wheelchair. And, he specialized in giving the “hot foot”, where a person sneaks up on an unsuspecting victim and quietly lights a book of matches at their feet igniting shoelaces and pant legs. It’s a sadly forgotten part of baseball like stealing home and the hidden ball play at first base. Drabowsky played this prank on everyone – teammates, coaches, reporters, even the commissioner of baseball.

So, everyone just take a deep breath, relax and channel your “Inner Moe”.

The real reason my hair is going gray…

I caught up with a friend recently whom I hadn’t seen for years. He gave me grief about how my hair was going gray – the normal crap you get from good friends. Somewhat defensively, I suggested that my change in hair color was related to the stress of my career and a soul sucking, tramatizing daily commute.

But, here’s the real reason.

It’s a Sunday and I see my son getting out of bed.

Me: “Hey son, good ‘morning’.” (Said with just a touch of fatherly sarcasm as it’s after 1pm)

Me: “You were out late last night.”

Son: “Yeah, I was out with some buddies. We got into a drifting competition with some rice rockets from San Jose.”

Me: (Trying to keep from exploding) “What? Where was this?”

Son: “In a big empty parking by the airport. ”

Me: “Was this in our car? Were you driving?”

Pause while I digest this…

Son: “Cafeteria trays. You get a couple from school, put them under your rear wheels, set the emergency brake and then let it sliddddddde.”

Me (under my breath as I walk away shaking my head): “Good God. What did I do wrong in a former life…”

I decided to try to make a daily bicycle ride part of my life this year thinking that it would help me to drop a bit of weight. In the winter, I’d slap on a head lamp and go out in the dark for an hour or two after work; on weekends, a longer ride. Recently, I finished my 110th ride of the year. During that time, I’ve covered more than 2,200 miles and climbed 190,000 feet.

At this rate, I only need to pedal an additional 18,000 miles to get down to my target weight for the year.  Clearly, I’m doing something wrong.

I’m going to have another Lagunitas and think about it.

Lately, I feel as if I’m channeling Ward Cleaver. I get home after a stressful day at work, sit down at the kitchen counter, pour myself a glass of wine, read the paper and ignore the familial chaos surrounding me.

But every now and then, one of these moments.

Beloved Bride: “Honey, did you know that our son has a girl he likes?” “Her name is Lindsay”.

Me, lowering my newspaper: “‘Son, look at you there blushing. What is she like?”

Son in an agitated voice:”How do you know what she looks like?!

Beloved Bride: “I saw her photograph on your Facebook page.”

Son: “What? You’ve been stalking?! That does it. I’m de-friending you”

Beloved Bride, in an admonishing voice: “Don’t you dare!”

Son, tapping furiously on his iPad: “Too late. It’s done. We are no longer Facebook friends.”

Beloved Bride: “Young man, you make me your friend again right now or else!”

Son: “What? What the heck does that mean?”

Beloved Bride: “That’s it! If you don’t friend me, I will no longer cook for you.”

Son, in a plaintive voice: “Wait you can’t do that! You have to feed me. You’re my mother.”