Recently, in homes across the U.S., people spent their Sunday morning walking around holding little cardboard boxes over their eyes. This was the result of a collaboration between Google and the New York Times introducing the broader world to virtual-reality (VR) technology.

It is one of those days that I will remember for years to come.

I’ll be the first to admit that I haven’t paid much attention to the VR space since Jaron Lanier founded VPL back in the 1980s. Facebook’s purchase of Oculus VR for $2b caught my eye, but mainly for the price of the acquisition.

Like many others, my assumption has been that while VR may have applicability in other limited areas, it is first and foremost a technology for video gamers; a community of which I am not a member.

My experience on Sunday morning changed all that.

I sat down at the table enjoying my multiple cups of coffee, while navigating through the Sunday Times (a weekend ritual in my household for years). Occasionally, I would take a look at the strange box that was included in a plastic bag with the paper, but I disregarded it as some kind of marketing giveaway, like a free bar of soap or laundry detergent.

After I finished the paper, my curiosity got the best of me and I opened the bag and discovered a pair of cardboard VR googles along with instructions for downloading a related VR app from the NY Times. Within minutes I had everything completed and was experiencing a new form of journalism, in this case an article called “The Displaced” about three children driven from their homes by war and other events. 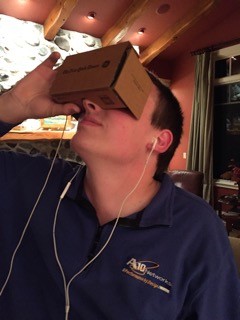 In the Times Editor’s Letter, Jake Silverstein introduced the value of this new journalistic experience: “By breaking free from the rectangular editorial frame of a traditional documentary film, VR invests the viewer with an uncanny feeling of agency, a sense of being able to look around for yourself.” Although the googles were rudimentary, I understood what he meant as I was immediately transported into the story — this was true immersive journalism. I could hear children walking behind me and turn my head to see them or raise my eyes skyward to look at a descending food drop, all as if I was part of the scene. The effect was electrifying and other family members had the same experience. My wife, for example, “watched” (I’m not sure that is the appropriate word) the story and was moved to tears during one scene, something that rarely occurs when reading the written word.

Our lifetime has been one of technology advances. For me this began with my parent’s gift of an IBM PC XT in the early 1990s (with a sweet 10MB hard drive and 128k of RAM!). A few years later it was walking through Rome with a business partner and having him call California using a Motorola StarTAC mobile phone. Then it was having “1,000 songs in my pocket” courtesy of the first generation iPod, followed closely by my introduction to the Mosaic browser.

Now, I’m adding to this list Sunday’s introduction to VR courtesy of the NY Times.

2 responses to “Looking through boxes.”